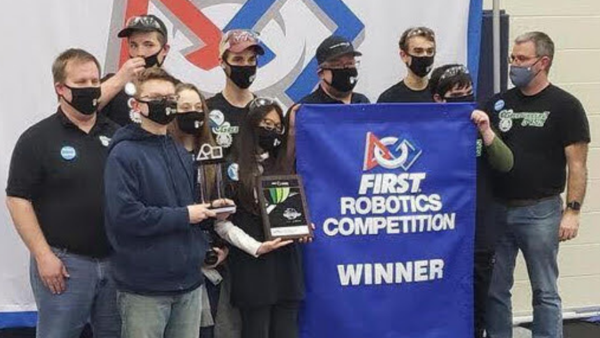 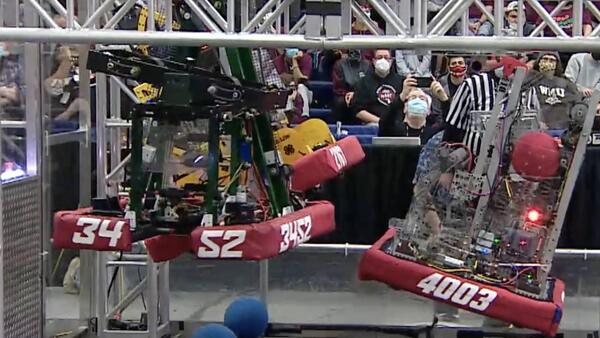 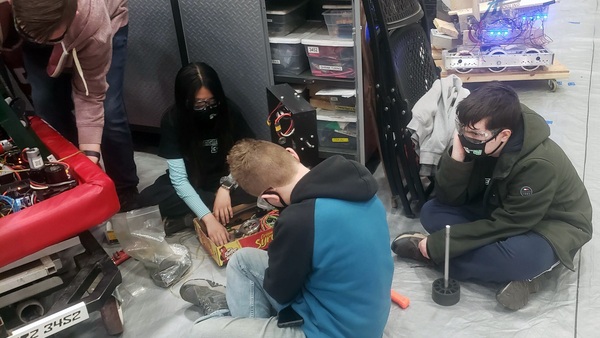 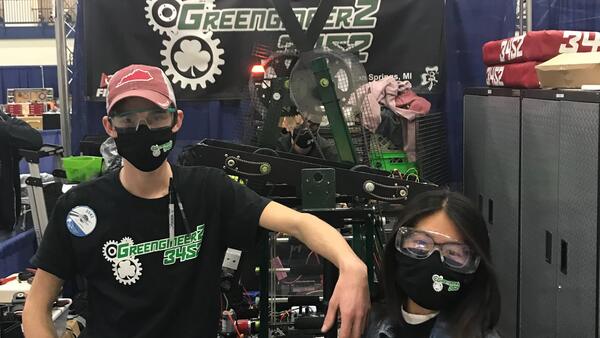 The team had a slow start in this three day event as they dialed in this year’s robot named “DK”. This year's challenge involves picking up 9 ½” oversized tennis balls and shooting them in either a low goal or a high goal. Teams need to make sure they are scoring their alliance’s colored balls while keeping the competitors' alliance away from their colored balls. In the last 30 seconds of a match the robots attempt to climb steel bars with the highest bar being worth the most points. The first 15 seconds of a match is the autonomous period where the robotics are pre-programmed to perform tasks and scoring is worth more.

The stand out features of this year’s robot is the ability to transverse climb to the highest rung at over 7’ high and the inclusion of a swerve drive. A swerve drive allows each wheel on the robot to turn and drive independently. This allows the robot to spin in place for aiming and to strafe across the game field for high maneuverability.

The Greengineerz improved throughout the qualification rounds and was sitting at 21 out of 31 teams in qualification points ranking. During alliance selections the GreengineerZ were chosen to join the #1 ranked alliance by Stryke Force from Kalamazoo and TriSonics of Allendale.  The elimination matches this year were streamed by the professionally produced GameDay broadcast. https://www.twitch.tv/videos/1423533438

The competition increased in the semifinals by an alliance made up of the Average Joes of Saint Joseph, Norsement of Suttons Bay and Robotarians with students from Watervliet & Coloma. The number one seed red alliance advanced in two matches 70 - 53 and 69 - 44. The robots were showing the stress of completion as swerve modules and intakes required repair or replacements between matches.

The GreengineerZ will compete in the Lansing District Event March 24th - 26th. They are over half way to the district points required to earn their 6th appearance in a row at the Michigan State Championship. The top teams coming out of the State Championship will earn seats at the World Championship in Houston Texas. Since the GreengineerZ founding in 2011 they have competed at worlds 5 times. In 2017 the team made it to the World's Einsteins round robin finals as an alliance captain.

Right At School Partnership with BSPS

BSPS and Right At School host event on May 4.

Round-Up is April 11-14 at Mars Elementary